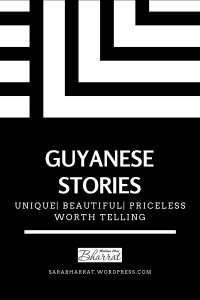 For most of my blogging career, I’ve written about Guyanese politics in relation to race and ethnic identity. But what many people don’t know is why I started blogging. All my life I’ve been obsessed with telling stories and I began blogging because I believe that our stories are spectacular stories that can’t be found anywhere else.

I mean, yeah, you may take a boat from Vreed-en-hoop to Georgetown everyday and then back again. You probably sit in the boat smelling the salt water, feeling a few cold splashes on your skin and seeing the soft golden light of sunrise or the colourful sunset. And I know you feel that it’s all part of your mundane existence.

But hey, trust me, there’s nothing mundane about what you’re experiencing. The things you see and feel and the memories you make of them are things that other people in the world will never experience in quite the same way. So the next time you’re in that boat, on that bus, in that market, stop, take a breath and look around you. And see. See the beauty, the quaintness, see what only you can see.

And this is exactly why I write and why I blog. It’s not because I’m good at it or good with words. I write because I want to teach people to see themselves beyond the noise, to value their own unique experiences, to embrace their identities and to know that it’s okay to feel passion, to express it and let it fuel your work.

A lot of my articles have been primarily emotive or have had emotive undertones. You see, I believe in rationalism but I also know that being able to think is not the only thing which is responsible for making us human. It is both our ability to think and to feel which makes us human.

“…when a monster grows, it grows out of control. It eats up even those who created the monster. And it’s time that our people understood this.” Walter Rodney, 1977, Georgetown.

In January, a woman suggested that I put down my pen – because it was useless – and that I march in the streets of Georgetown. I was taken aback. Did she really believe that tramping aimlessly in the sun was superior to writing? And if so, did she believe it while being aware of the cost attached to silencing only one pen in Guyana?

Her view of writing did not surprise me. She is only a product of her society and its culture. She has been conditioned to see her world as a place where the writer is meant for spinning El Dorado fantasies and where writing is not truth but merely the silly imaginings of a fool. How many more Guyanese share her view? Even one more is too many.

I believe now, more than at any other time in the history of our nation, the writer – the man or woman whose pen deals in the currency of truth – has become chief activist. Writing is a powerful and dangerous form of activism. Words are not merely read or heard, they are felt, absorbed, embedded in the memory and they shape the way we see, think, act.

For weeks I have written about the fear and silence which imprison our people. The Guyanese writer, the Guyanese artist, is the voice of the silent, of the silenced. They carry the true spirit of the fight against oppression. They create hope for and belief in change. They awaken and give strength. Without them, there is no hope for freedom from oppression, no hope of stopping the monsters that have grown out of control, no hope of having hope.

Like any form of activism, like anything else in the world for that matter, writing comes with a price. For many weeks I have not written. I do not consider them weeks of silence. They have merely been weeks of observation, of learning. I have been watching and listening, absorbing.

I also believe that any price I pay to shift the culture of fear and silence, to awaken more people, to give my peers voices, will be worth it. I believe that our people and country are worth all my correspondence ending up at the Central Intelligence Unit eventually, my phone being tapped, my privacy utterly and completely invaded. I believe that it is well worth the anger, the depression, the heartbreak, the broken friendships, the lost relationships, the aloneness, the labels of anti-coolie coolie woman and racist.

So what is the problem? The problem is this: I am not the only one who shoulders the cost. I overlooked the fact that other people would have to pay a greater price for my writing. I did not consider the price that would be paid by the man I love or by my mother, my brothers, my nani, my friends. What right do I have to condemn these people to live in fear for me? Worse yet, what right do I have to put them at risk?

Would it be easier for all of us if I sat in my house and lived my life in silence? The fact is that not writing would cost every one of us far more than writing. If I did not write then I would abandon my basic responsibilities as a human being and eventually become but a shadow of a woman. If I did not write then I would rob our people of their chance of having one more voice, of change, of hope, of the promise of a better Guyana.

During my weeks of observation, many people asked me whether I had been threatened, if I had given up, if I had bowed to the monster. Who will threaten me? And where is the need to threaten me? The most dangerous thing I face is not threats from the oppressor or even my own fear; it is the fears of the people I love and my need to sooth them, keep them safe.

I’m a woman and yes of course I have a vagina. I just realised that I haven’t written this word once on my blog. Shame on me. Anyway, to make up for it let’s all say it:

Oh wait, I should note here that I am partial to the word “cunt” as well. I’ll have to write about it soon.

Now go thy way and do not be afraid to say Vagina!

Trust is not a one way thing.

It’s ironic that people ask me for relationship advice. You’d think I’m some very experienced woman with enough ruined relationships to serve as a sort of guru. I’m not.

Every time a woman in particular asks me for advice the conversation ends one way. She’s depressed and angry by the end of it and usually writes me off as a “cruel bitch”. I don’t mind. We’re not all wired to take the truth. So ladies, if you’re going to keep reading this, keep in mind that the truth hurts and pisses off even the most controlled among us.

Last week, one girl asked me if I thought her man was cheating on her. This is how the conversation went:

Distressed Woman – I think he’s cheating on me.

DW – I saw some messages on his phone to this girl.

Me – I see. And how exactly did you see his phone?

DW – I went through it while he was in the shower. I know. I know. That’s wrong. But he makes me feel like I have to.

DW – But I’m not sure if he’s cheating. He was telling her that he’d like to hear what she sounds like when she moans. Do you think he’s cheating on me?

Me – You need to ask him that. If you can’t trust him. Leave him.

Sigh. Shit like this irks me. Yes, it’s wrong to go through a man’s phone, his emails, his facebook messages, his wallet, his personal belongings. It’s a violation of his privacy, a violation of his trust in you and it’s an insult to yourself, particularly your intelligence.

Clearly, DW is insecure and has trust issues. But I wonder, just how many of us understand this concept of trust. How can you expect a man to be trustworthy if he can’t trust you with his privacy? I believe that trust is a two way thing. You get what you give. If your investments are shitty then expect twice as shitty returns.

Furthermore, such actions make you look desperate and demented. No man can make you feel like you have to reduce yourself to such a disgusting pile of patheticness. You must choose to become that thing. If you can’t trust him, you can’t love him; if you can’t love him then how the hell can you hope to build a lasting relationship with him?

So for all you ladies in that position, stop embarrassing yourself and womankind. Do yourself and the man a favour and just leave. There’s no hope for a lasting union there.

And while you’re at it, learn to love yourself enough to get some help. Become a woman of character, a strong woman who can be trusted and who deserves to be trusted. Who you are will attract the type of man you want.

So remember, trust is a two way thing. Happy hunting!

The unsaid. The unborn. Impregnated with words, feelings, so much of me.

But then my greedy eyes reached for the sky again and beheld a moon and sun, separated by space, connected by space, sharing space. Apart and together all at once.

And you were there too, like you always, always are, but this time it was you taking me somewhere in my own dream. Wherever somewhere is I don’t really care. As long as somewhere contains the sum of us. And in your somewhere where I now am, I was promised to you for every lifetime wherever life can be, has been and will be.

How can it be day time madness in dreams then? Nothing is ever madness where I’m with you. Because for me, you’re the epitome of everything real, sane and eternal.