Mr. Khalil is a final year Economics student at the University of Guyana.

Our pattern of voting influences the nature of government and its policies. The power to freely and informedly choose the political and socioeconomic data by way of the ballot is what constitutes the lynchpin of a peaceful democracy.

Ideally, elections ought to reward governments for good policies and governance in line with what a nation desires. Conversely, politicians who disappoint are, through the polls, booted out of office. It is the prospect of losing office or being rewarded with more tenures which keep government in check and on the path of pursuing good governance and socioeconomic prosperity for their citizens.

However, in Guyana politics hardly works that way. For much of our post-colonial era, voting has transpired along the ethnic lines of the two dominant groups: Afro and Indo-Guyanese. There are many factors behind this pattern. Prime among them are Western interference and more importantly, a stunning lack of statesmanship by national leaders who failed to forge reconciliation between the rival of ethnic groups and a common agenda of nation building.

Due to this ethnic tension, the two main parties, the PPP and PNC, are perennially assured their political existence by virtue of their support among the Indo-Guyanese and Afro-Guyanese respectively. As a result of the existence of these vote banks, however, these political parties have not had to give much weight to the consequences of their party’s policies and decisions.

If these parties did give much weight to their decisions, the PPP-led government might have seen a few dismissals of those Ministers embroiled in corruption scandals. (Brazilian President Dilma Roussef’s government has seen some). Similarly, the PNC-dominated parliamentary coalition which voted against legislation that would enable hydropower development – legislation which was nevertheless passed by virtue of a smaller opposition faction, the AFC voting with the ruling party on the measure – would have been more open to compromise on this key development project.(in the US, the right wing Tea Party Republicans run the risk of political annihilation for similar obstructionism).

However, because of ethnic insecurity and mistrust, which have their genesis in traumatic historical antecedents that are yet to be adequately addressed, voters largely base their support on race and support their “home” parties blindly. However, the winds of change are quietly brewing.

Demographic changes such as an increase in the number of persons of mixed heritage, and an influx of immigrants from Brazil and China mean that the ethnic pull may not be as strong. More importantly, however, is the increase of the population’s portion of people under the age of 35. It is the rise of a cadre of young, dynamic voters that poses the most potent threat to political tribalism and offers the greatest hope for democratic renewal.

Young people do not bear the historical scars of brute inter-ethnic hostilities. The government’s politicos, in particular, have lamented the clean slate mindset of young people. Attempts to school youths as to “the way things were” have floundered as in this, the Information Age, young people through their Blackberries , iPods and iPhones and tablets and laptops have tapped into a world of ideas and they know, we know, that a better, more progressive way is possible.

Even parents, who may have more reason than their offspring to carry and propagate racial prejudices, no longer do so, because if they have traveled and lived abroad, if they too are as connected (or in this author’s case, more connected) to that world of ideas, they, as well, know what better systems of governance, that are conducive to multiculturalism and harmonious development, look like. It is becoming harder to feed young voters prejudice pills especially as they increasingly interface with each other online and come to the realization that divisiveness impairs development.

Guyanese can no longer wait for the political parties to lead the break from race based to issue based voting choices. For decades, the two political dinosaurs have done precious little to reach across the ethnic divide (token attempts at creating a facade of diversity hardly count) while simultaneously using rank race baiting to guard their own turfs. As outlined above, the status quo actually benefits their existence.

The change must, therefore, start with the voters. From the ground up. The parties will then either be compelled to modify their electoral strategy or die a political death (as was the case with the Republican party prior to the Ronald Reagan-led revival).

For instance, continuous losses of Indo Guyanese support, though it might not take away the Presidency and Executive which is guaranteed on the basis of mere attainment of plurality in the polls, could keep the PPP in a legislative minority that might eventually compel it to seek some constitutional arrangement for shared governance (as is the case with Parliamentary democracies in Trinidad, Britain and Germany).

Meanwhile, if the PNC sees a desertion of Afro Guyanese supporters, it would be compelled to reinvent itself as an ethnically inclusive, ideologically oriented unit instead of remaining as the Afro-centric party it is perceived as now. To speak the truth, it is the PNC’s inability (or unwillingness) to transform itself that has helped to reinforce the ethno-centric voting patterns and keep Indo-Guyanese firmly in the PPP camp. It is indeed a truism that it is a credible threat of electoral defeat by its rivals that keeps government in line.

It is the young, so far unprejudiced voters who look at issues rather than ethnicity that can lead this sea change in our politics. Young people must exercise courage and avoid being shackled by the bonds of racial mistrust and choose their representatives on performance, not pigmentation.

In political theory, such voters are called the independent voters, or swing voters. They hold the balance of power in the mature democracies and the political fortunes of governments rise or fade at their whim. These are the most insightful voters and the ones who governments fear the most.

Are there enough of us to shift the pendulum? Are you a swing vote? 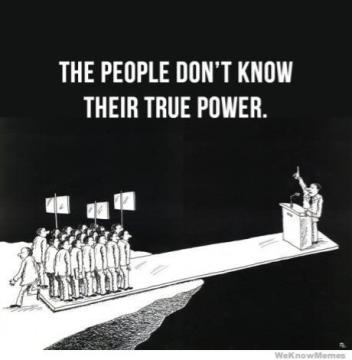 Do not be silent so that fear may slowly stop your heart. Rise, speak! There is always hope.
Sara