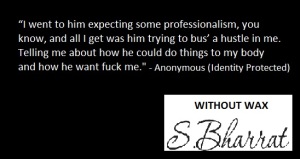 These days I don’t say a whole lot about politics in Guyana but that doesn’t mean that I have nothing to say. I’m just not ready to say it. I’m still here and I’m still engaging my country men and women and I’m still recording experiences and opinions. Since the Granger government swore in its ministers and appointed its senior officials there has been a lot of muttering – even from that half the population that is pro-Coalition government. A chunk of the mutterings has come from women who very passionately dislike a certain senior government official.

Last week – in a blatantly sexist  act – I got in the car of a female taxi driver. It was quite some distance to my destination and so we got to talking about her profession, why she chose it and whether she felt very secure doing it. We drove by a trench that was recently cleaned and she commented about how the new government really was making an effort. I told her I was fond of the new president’s image even if I didn’t like some of the policy edits and approaches. Her response?

“Yeah girl, I like we new president to but it got one one of them people he got around he that I really can’t tek.”

“I mean I don’t understand how some people and them dutty character get big government wuk.”

She began telling me a story of sexual harassment and even without her naming the individual I immediately knew about whom she was speaking. Long before this particular Government official rose to his current position he has been infamous for his attitude to women – particularly younger women.

“I went to him expecting some professionalism, you know, and all I get was him trying to bus’ a hustle in me. Telling me about how he could do things to my body and how he want fuck me. I mean what shit is that? Can you imagine how I felt? How was I suppose to receive a service from a man like duh eh? And imagine this nonsense now, he get big government wuk.”

I related my own encounter with the same gentleman to her. It had happened more than 7 years ago at the Georgetown Magistrates’ Court. Since then, I’ve heard many similar stories from women about him. The standard response to this particular official is “O, he? Everybody know how he stay”.

Such sordid behaviour from our politicians is nothing new. However, it certainly isn’t normal behaviour and it shouldn’t be accepted behaviour. A prerequisite of holding political office should be impeccable moral character and it is something we should begin demanding. The future of Guyana lies not in party politics but in the ability of a nation to recognise what it deserves and to demand those things.